Viral hemorrhagic fevers are a group of illnesses caused by several

families of viruses (the arena virus, filoviruses, flaviviruses and bunyaviruses). These viruses cause a syndrome characterized by multi system involvement resulting in a damaged vascular system. Although most cases of hemorrhagic fevers are severe, some cases are less acute than others. The viruses as a whole can be found throughout the world; however, each virus typically causes diseases or is basically endemic  in certain geographical area.

The Marbug and Ebola viruses, which belong to the flovovirus family, are among the most renowned causative agents of viral hemorrhagic fevers. Since the mid 60’s, these two viruses have been the source of an irregular pattern of sporadic outbreaks. The clinical course differs among patients but often always include the predominant signs such as fever, vomiting, hemorrhage, cough, diarrhea and general jaundice with the majority of these aforementioned symptoms occurring very rapidly which if not evaluated and treated the soonest as possible can progressively lead to profound hemorrhage, organ destruction and shock.  The mortality rate ranges vastly from 25%-80%. When patients do manage to survive the most critical stage of the disease, the recovery period is often prolonged with weakness, malaise, and cachexia being  very common during the course of recovery.

Animals and certain insects appear to be the natural reservoir of the causative agents of viral hemorrhagic fevers. Humans usually become infected when exposed to an unrecognized host or an insect bite. However, human-to-human transmission occurs occasionally; it involves close contact and normally occurs via the blood-borne route after exposure to blood or other body fluid. Percutaneous exposure requires only a very low inoculum of contaminated blood for transmission to take place. Mucous membrane exposure is another method of transmission, and airborne transmission doesn’t appear to be likely although the possibility has not been completely eradicated.

A diagnosis of Ebola and Marbug should be considered in a patient who has a febrile, hemorrhagic illness after a recent travel to certain parts in Africa and Asia or who has handled animals or animal carcasses from those aforementioned parts of the world. The local and state health department should be contacted immediately when Ebola and Marbug viruses are suspected because local health facilities and public laboratories would not be able to properly identify and confirm a diagnosis in countries not endemic to the disease.

All healthcare workers who are involved in caring for patients with filoviruses must adhere to strict infection control measures. Systems must be set up to have objective observers to make sure that each worker is adequately adhering to the basic principles of precaution by wearing protective personal equipment in the form of caps, goggles, masks, gowns, gloves and shoe covers. 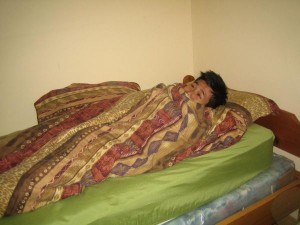 Treatment is largely supportive maintenance of the circulatory and respiratory systems. It is very likely that infected patients will be in need of assistive ventilation and dialysis during the acute phase of the disease. Supportive care for a patient with such a debilitating and incapacitating disease requires psychological support for the individual and the family. Moreover, the patient, family, healthcare workers as well as the general community will need a substantial and well coordinated education about the known elements and management in individuals afflicted with viral hemorrhagic fevers in general.

The information posted on this page is for educational purposes only.
If you need medical advice or help with a diagnosis contact a medical professional