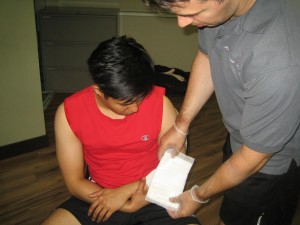 Upon seeing the victim or the afflicted individual, rescuers should assess if there is foul play in which another individual is responsible for the injuries that they have sustained. This should be suspected when the individual has unexplainable bruises or bruises that could not have possibly been caused by the apparent accident. If the patient is conscious, the rescuer should ask the patient about the incident while rendering medical care. Asking bystanders or onlookers is also optional especially if there is more than one rescuer at the scene and there is an opportunity to ask. However, if the patient is too stressed or if the patient cannot verbally express him or herself, the rescuer should ask the questions at a later time.

How to Bag the Evidence

In most accidents or medical emergencies, an uncontaminated bag where the evidences should be kept is not always available. If this is the case, first aid rescuers should put the clothes of the victim on the floor where it will not be touched by anybody or will not get lost. Upon the arrival of the EMT’s, healthcare professionals or authorities, rescuers should then point to the location of the individual’s clothes as EMT’s and authorities often have uncontaminated bags.

View all posts by finzy →